It was because of a woman I met while accompanying some guests on a sailboat tour that I became  anxious about the local book club visit I’d agreed to. I started to think how the noun club has two meanings. A group, yes… but also  a weapon.

I’ll call her Jen: fiftyish, fit,  designer spectacles, retired. She was one of those people who had something (though nothing substantial) to say about everything,  and she very much enjoyed doing so.  Friendly, you might say. Or then again… Her husband was quiet, and only brightened up when the conversation turned to  high-performance outdoor clothing.  What did everyone do, Jen wanted to know, and then  to comment and pronounce upon; my nephew, a statistician, stumped her somewhat. I considered pretending to be one, too, but knew he would give me away.

“A writer?” she said. “We had a local writer visit our book club last month. Her book was awful, and she did say to be honest, so we told her so. I thought it was – well, boring.  And there were just far too many adjectives!”  She paused for breath, beaming at the memory,  and waiting, it seemed, for congratulation. “Well, “ she continued, “I guess she got a free meal out of it! “

“Did she cry?” I asked. If she did not, I thought, the nameless local author would have had to laugh hysterically, and thank them profusely for their  hospitality.  Whoever she was, and however many flabby adjectives she had used, I hated to think of her just sitting there, a fake smile pinned her face.

“Oh, no,” Jen said.   “We move on  pretty quickly.  We don’t normally get into complicated debates –  after all, the main point is the food! We just score the book out of five and  say whether we liked the  actors  – I mean, characters, then we tuck into the potluck.” Did they, I wondered, practise the same ruthless honesty regarding the food: Who made this  Paella thing?  Well, Sue, I have to tell you, it’s just  the worst dish I’ve ever eaten. Far too much rice! And what’s with the yellow colour? One out of ten for you…

The boat was not very big, but luckily (especially for her) Jen decided to go aft and talk to the Captain.

I checked my email when I got home… Sure enough, the invite mentioned a potluck, but I stayed more or less calm by reminding myself repeatedly that the club host, who  did not have a mean bone in her body,  had already read The Find and told me how much she had enjoyed it.  And if they did turn on me en masse,  I resolved  to be extremely honest in return.

I need not have worried.  I stepped into a sunlit  house  lined with countless books,  and sat down with ten  articulate and intelligent women who had  each given my novel some hours of quality time.  It seemed that while each connected  to the story in her own way,   they all  related very passionately to what they read. My  novel, and the others they had picked (The Find was nicely sandwiched between last month’s novel, Island Below the Sea,  by Isabelle Allende, and next month’s memoir, Trauma Farm, by Brian Brett)  seemed to exist in the same plane as the  real stories  of their own  and their friends’ lives  which they  brought into the discussion: births and miscarriages,  power struggles, love affairs,  diseases,  deaths. 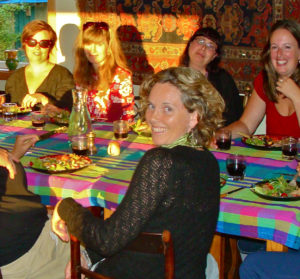 At various points at least three of the club had tears in their eyes  (“I was reading it on the ferry, and I had to stop because I knew I’d make a fool of myself!”), but the evening was full of laughter, too.  There were great observations: “This book is all about how power can shift…” “I think the set-up was so risky, but  it worked,”  and great questions:   “Do you have to write, or is it a choice?” “Did you ever consider a different outcome for Anna and Scott?” “Do your characters affect your personal life? Do you construct a character deliberately, or do they just turn up  and you have to serve their needs?”  “Do you feel have to set yourself new artistic challenge with each novel?”The questions  were not pretentious or academic,  but sprang  from  what each reader brought to the book.

I hope to share some replies  here in  the next week or so.

Bookclubs – what’s not to like? Did I mention the food? Excellent.

Please use the contact form to enquire about book club visits, virtual or actual.