A Tale of Four Storytellers

In this thoughtful and illuminating essay posted on AllLit Up,  https://alllitup.ca/Blog/2015/A-Tale-of-Four-Storytellers,  Poet Zachary Wells asks whether Canadian culture is old enough to  make a literature of fantasy, and  concludes with an affirmation that yes, it is, provide we  have an elastic definition of what Canadian is, and can overcome the traditional prejudice against work that breaks out of realist bounds.  Wells includes Paradise & Elsewhere in his survey of  recent fabulist short story collections, which also includes work by  Sean Virgo, Mike Barnes, Molly Peacock and Stuart Ross. Here’s what he says about Paradise  & Elsewhere:

Kathy Page, originally from England, is best known for her realist fiction. Her recently republished prison novel, Alphabet, has been praised for its gritty fidelity to the prisoner’s experience in the English penal system. Page’s editor, John Metcalf, admitted to her that he has a McEwanesque “prejudice against non-realistic writing,” and was therefore reluctant even to read the manuscript of Paradise & Elsewhere (Biblioasis), which Page had submitted at the same time as a collection of more conventional stories. When she prevailed upon him to give the fabulist book a chance, it turned out that he liked it a great deal. 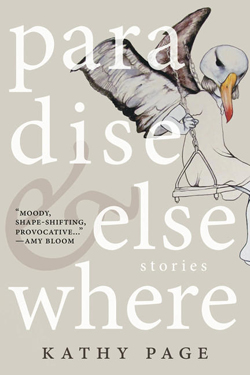 As have many readers and awards jurors, perhaps because of the very archetypal nature of the collection’s tales. Tolstoy, who looked to the art of the peasantry for models, famously said that “all great literature is one of two stories; a man goes on a journey or a stranger comes to town.” The latter plot is crucial to Page’s dark fables. The place where the stranger arrives is not usually a town, per se, but the settings of Page’s stories tend to be hostile, isolated, inhospitable zones. If these are not always “the places where things begin,” as the book’s cover copy proclaims, they are certainly the sort of place, like the Galapagos, where things, be they species or languages or stories, mutate into unique, heterogeneous forms—the sort of place where a stranger’s arrival means trouble.

Indeed, one of the book’s most trenchant themes is the troubled interpenetration of the modern and the pre-historical. In “G’Ming,” the book’s first story, the narrator is Aeui, a teenager on an impoverished island who bilks tourists of money in exchange for “authentic” exposure to village life. While Aeui disdains the gullibility of his marks, he is also contemptuous of his shaman uncle who “sits by the river all day. It seems to me he has no obligations.” The next story, “Lak-ha” is the very brief origin myth for a community that clings to life on an exposed, stony peninsula, supported by the Hetlas tree, the fibrous wood of which, it turns out, is very good for making rope. A chance visit from a foreign ship brings commercial exchange to Lak-ha. The rope trade affords a measure of prosperity to the people, who now “have television, internet, iPod, cellphone, denim jeans, Barbie doll, same as you.”

As in Barnes’ and Virgo’s books, the nature of storytelling, its origins and its future, the imperatives of “objective” journalism or science in conflict with myth, feature prominently. In “Clients,” a fable set in an unspecified future time in which the rage for expertise has infiltrated all aspects of society, a couple hires a professional conversationalist who “doubt[s] that [they] would enjoy a home-grown conversation.” They decide to give it a go regardless and the story ends with them as an Edenic couple, speaking to each other haltingly, making the first hesitant, unmediated forays into language, “a new country, vast, intricate, ours.”

The article is very much worth reading in it entirety. https://alllitup.ca/Blog/2015/A-Tale-of-Four-Storytellers